In 1841 the architect Luigi Poletti of Modena (1792-1869) was commissioned with the project for the construction of the New Theater in Rimini, and designed an Italian style theater, but with some significant variations, overcoming the neoclassical style of the first half of the nineteenth century. Inaugurated in 1857 over time it suffered various earthquakes, injuries, and destruction due to the world war and was closed. In 1947 the theater, partially destroyed, was dedicated to the musician Amintore Galli (1845-1919). Between 1975 and 2018 various restoration interventions were undertaken in the different damaged areas, thanks to various regional contributions and European fundings. Finally in October 2018 the opera singer Cecilia Bartoli inaugurated the new Galli Theater.

In the recent times the restoration of the Galli Theater in Rimini was a huge, complex work that lasted more than 5 years. It involved professionals and companies of excellence coordinated by the director of the works of the decorative apparatus, Prof. Francesco Amendolagine, a figure of national and international point of reference for the restoration of the decorative plastic apparatuses, former commissioner for the reconstruction of the La Fenice theater in Venice. Step by step, meeting after meeting not only thanks to the professionalism of those who have been tasked with carrying out this restoration, but thanks to the passion of the inhabitants of Rimini for this historic monument that they have always carried in their hearts and strongly desired by the municipal administration, the result was excellent. Italy is rich of historical theaters from the North as the Teatro La Fenice in Venice, passing through the Teatro La Scala in Milan, the Verdi in Florence, the Regio in Parma, up to the south with the San Carlo in Naples, the Petruzzelli of Bari and the Massimo in Palermo. As years went by many of them have been marked by destruction or fire, but often thanks to the love of their citizens they have risen more beautiful than before. As stated by the Prof. Amendolagine, the Italian theater is as a wonderful musical instrument comparable to a “Stradivari” violin. Rebuilding a theater is a bit like rebuilding a musical instrument. The great craftsmanship and attention to details is of fundamental importance, where nothing is left to chance, especially in a construction site like this where the will of the client, since the premises, has been to achieve an intervention of the highest profile and excellence. The apparatus of the many artistic lightings, among which in the centre of the theater stands out the big chandelier is one of the most remarkable elements among the decorations of the theater itself.

MULTIFORME® has had the honour of developing over 330 custom lamps including the big classic chandelier 48-light in bronze, as well as a series of handcrafted brass and bronze lamps: appliques for the stalls, the proscenium, the corridors and the foyer and the featured “floor lamps with griffon” for the boxes. The assignment for the realization of the big classic chandelier and the handmade lightings was conferred by the general contractor in January 2018 and the lamps were installed between May and August of the same year. Seen the complexity of the work and the importance of this realization the times given were really very tight.

The production was based on an in-depth study of the original mid-nineteenth century drawings by the neoclassical architect Luigi Poletti, who had in his projects well defined the characteristics of the big chandelier. All handmade lightings have been designed with a modern software and technologies capable of guaranteeing a high-profile performance without overshadow the artisan and artistic nature of the intervention itself. The processing has been carried out entirely in our laboratories using superior quality techniques and materials, focusing not only on the aesthetic appearance of the product but also on the safety and durability of all the lighting fixtures. Our intervention was not only limited to the production of handmade lightings but included many services, such as the technical consultancy (including the structural design of the big chandelier in the hall’s theater) and lighting consultancy (to ensure high illuminative performances and reduce the energy consumption) up to, during the assembly phase, carried out by our specialized installers’ team.

The big chandelier in the theater’s hall

From the audience, the 1st and 2nd order of boxes and the gallery, following the movement of the red curtain that rises on the stage looking upwards, one is inevitably kidnapped by the big chandelier that measures about 4 meters in diameter and 4 meters in height and weighs about 600 kg. This big classic chandelier hangs from the ceiling using a system of dual safety hoists system. The materials used to make this classic artistic chandelier are: a supporting structure made of stainless steel, completely covered with cast bronze and forged brass elements. The chandelier supports a radially of 48 hand-blown Murano glass spheres arranged on two orders. The lamp-holder spheres in Murano glass have been satin-finished by an acid etching technique to avoid glare and to diffuse the light more gently. The lower body of the big chandelier is embellished with garlands of Bohemia crystals of different shapes such as octagons, drops and lozenges to create suggestive effects of light refraction. The entire metal structure of the big chandelier was finally finished with a galvanic gold-plated bathroom treatment, to protect the surfaces and guarantee their value along their future life.

As well as the big classic chandelier, the handmade lightings for the walls with one, two or five lights that were installed in the corridors, in the proscenium and in the first order of the boxes were developed starting from the drawings of the Architect Poletti and some fragments found in the theater’s original building site. These lightings are made with the same materials used for the big chandelier: stainless steel, brass, bronze fusions, Murano glass and pure gold bathroom.

Between a balcony and the other of the first and second order of boxes, have been mounted floor handmade lightings, illuminated by three Murano glass globes. These floor lamps are installed with a special fixing method on the golden griffin, symbol of the Galli Theater. One of the peculiarities of this type of lamp is the study in an anti-seismic key made by our technicians, as requested by the client, to prevent wide oscillations from creating situations of damage and danger for the audience in the theater’s hall.

In October 2018 the ‘Amintore Galli’ Theater of Rimini raises its red curtain again: after 75 years the place of great music returned to the city of Rimini and to the Rimini community. The curtain reopened on the extraordinary voice of Cecilia Bartoli, mezzo-soprano star of world opera, who presented her Cinderella in semi-staged form, accompanied by the Musiciens du Prince. Soon after on November 3 2018 even the world famous ballet dancer Roberto Bolle, étoile of the Scala Theater of Milan, and for ten years Principal Dancer of the American Ballet Theater of New York, arrived at the Galli theater in Rimini and with his extraordinary presence on the rediscovered stage brought on stage the show “Roberto Bolle and Friends” a significant event to underline the rebirth of this theater. This year in august the President of the Italian Republic Sergio Mattarella attended the concert directed by the great maestro Riccardo Muti with the Luigi Cherubini young orchestra, appreciating not only Mozart’s music, but also the context and the beauty of this theater brought back to his ancient splendours. 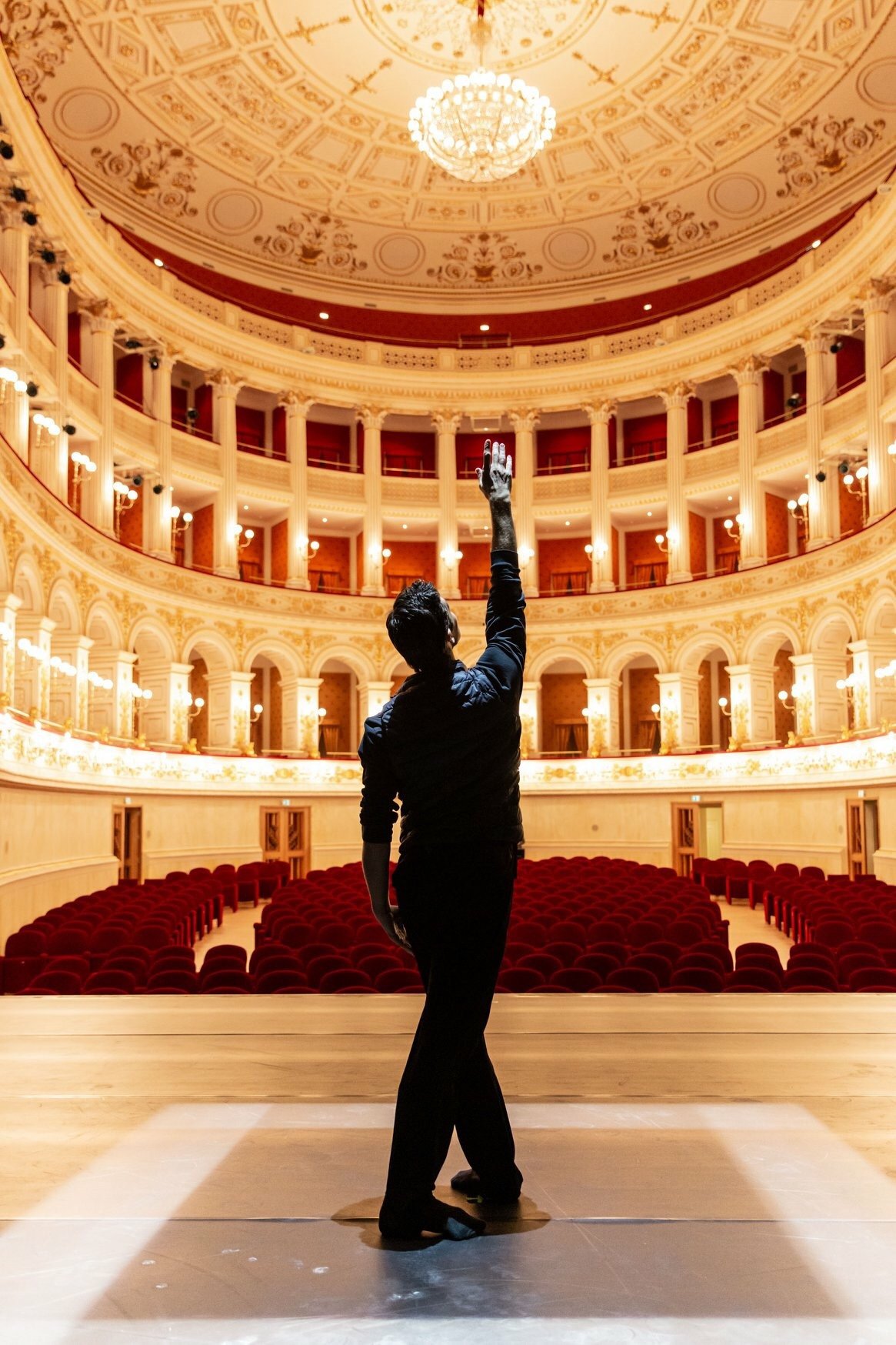 After many important projects abroad, with this highly prestigious project MULTIFORME® is pleased to have contributed to the creation of an exceptional work in our beautiful country Italy. Developing a big chandelier and hundreds of handmade lightings and having the opportunity to work in a theater of this dimensions has been an intense and rewarding adventure. At the same time it was also an honor to collaborate shoulder to shoulder with excellent Italian companies, professionals and local administrators, all united for a unique purpose: bringing the Galli Theater of Rimini to light. 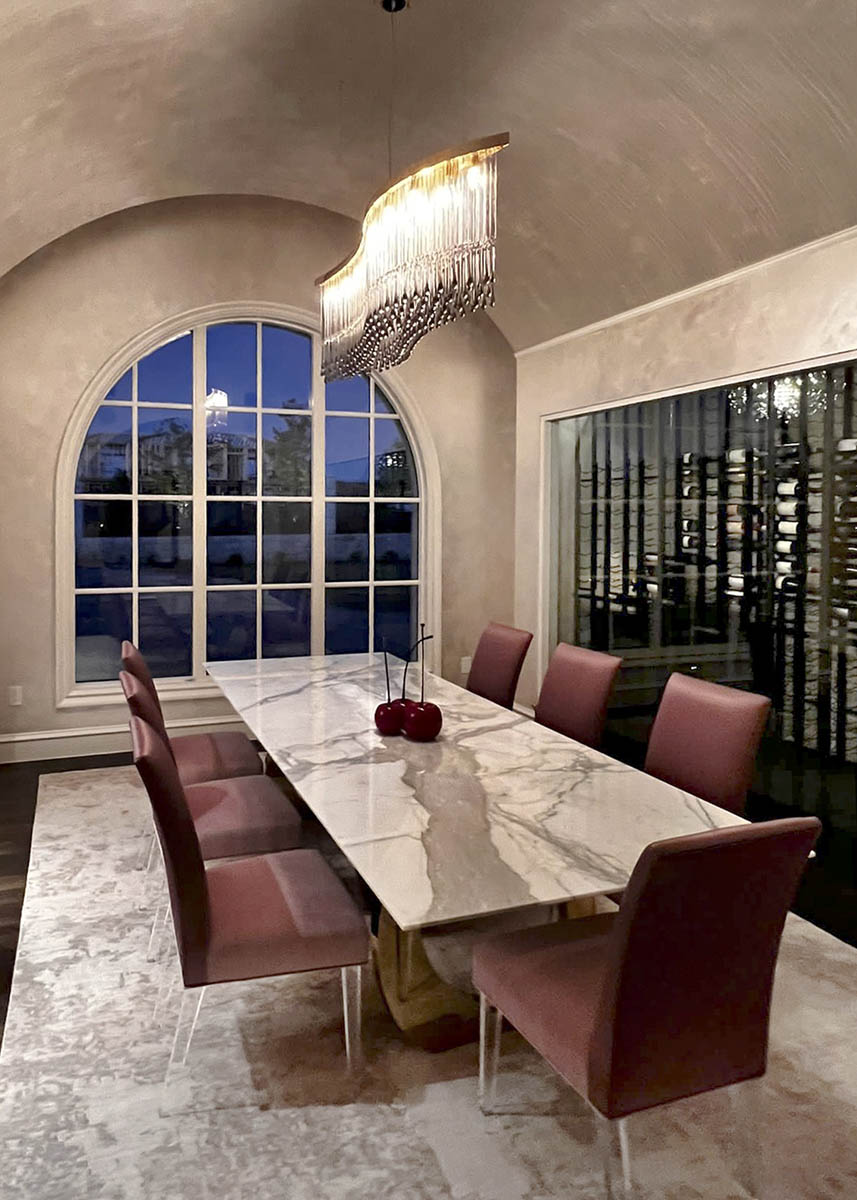 The Dancer chandelier protagonist of an elegant private salon 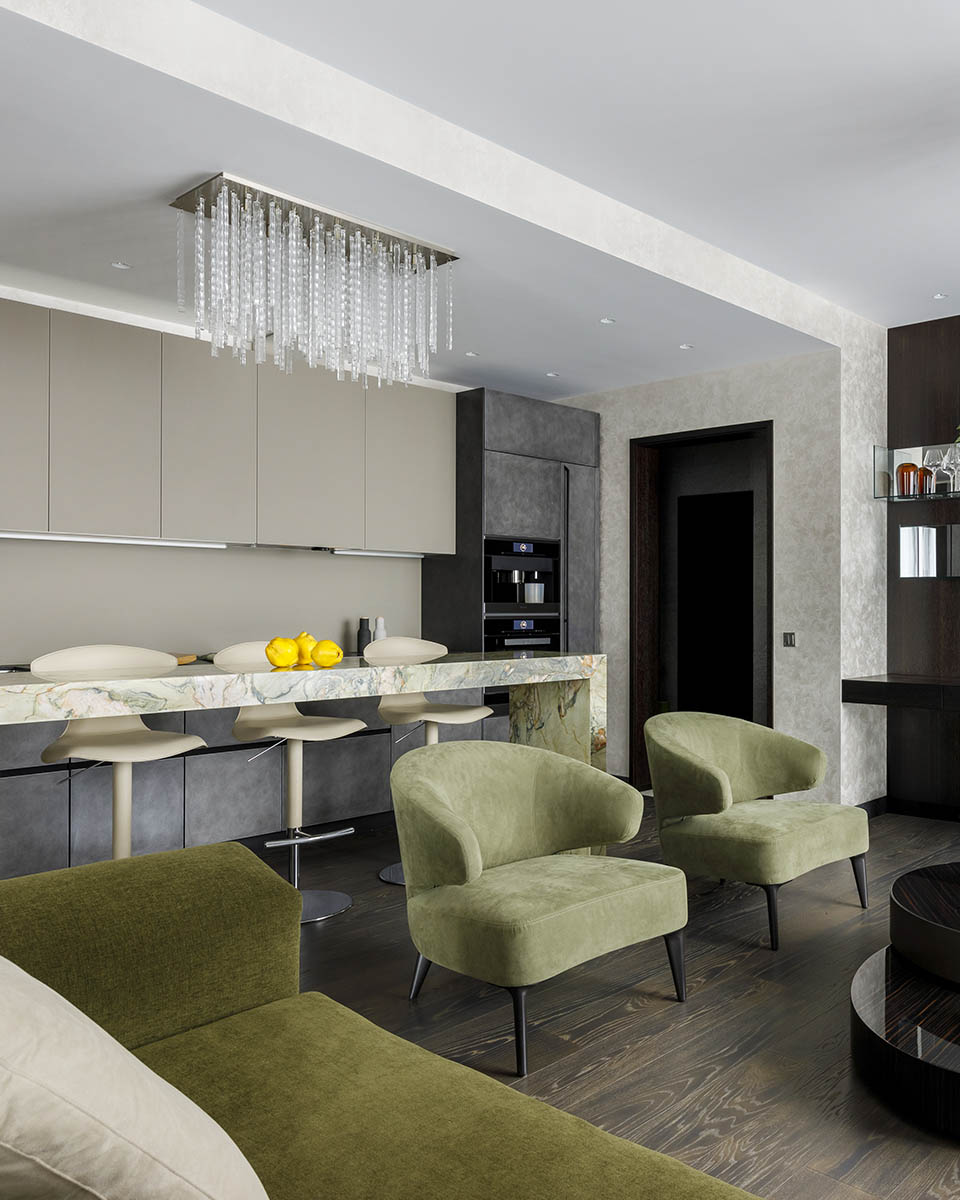 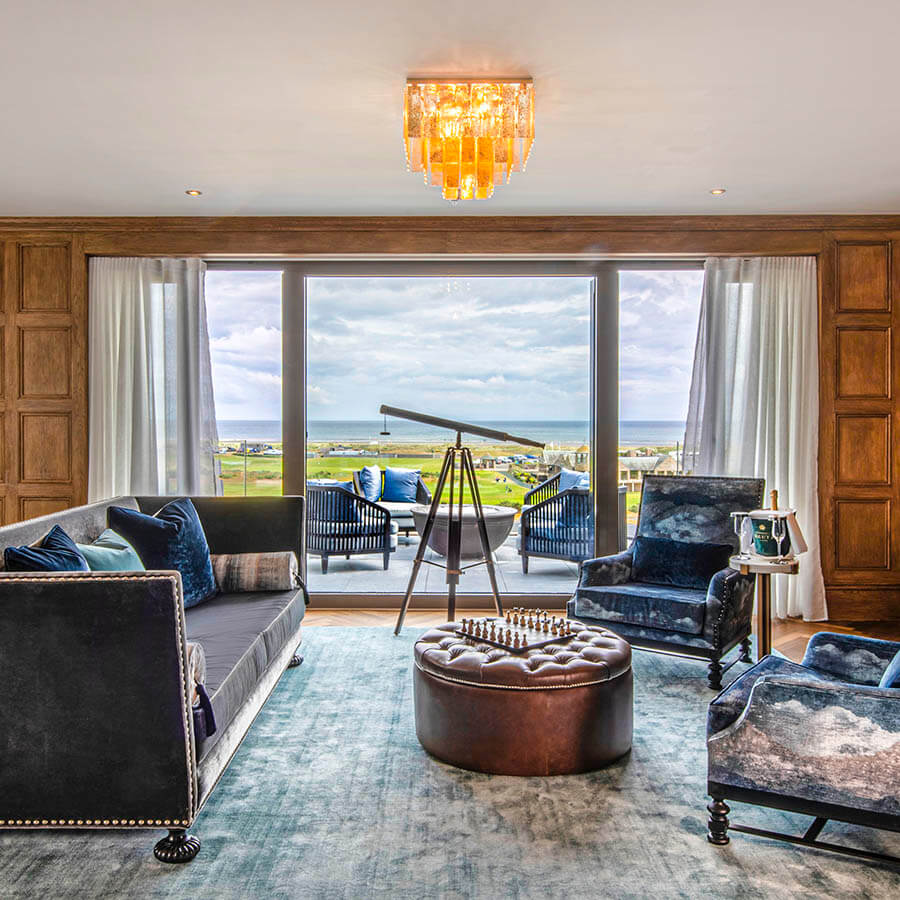 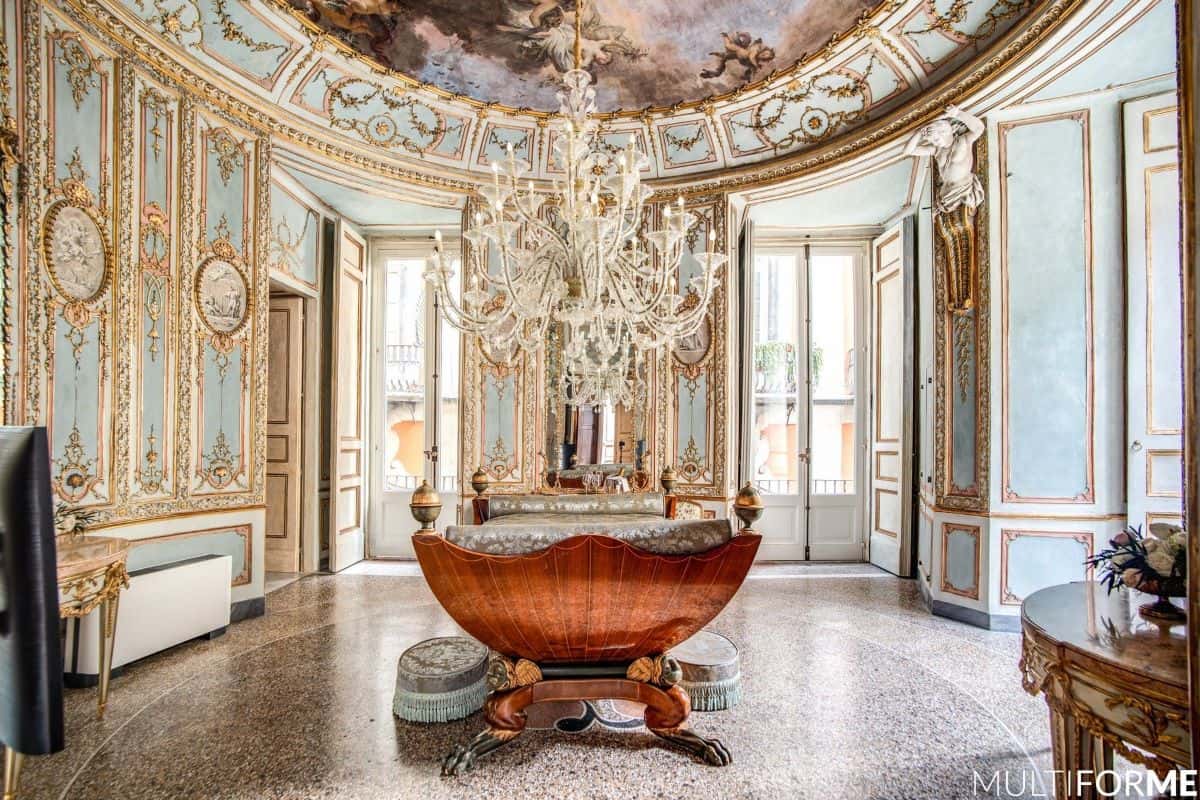 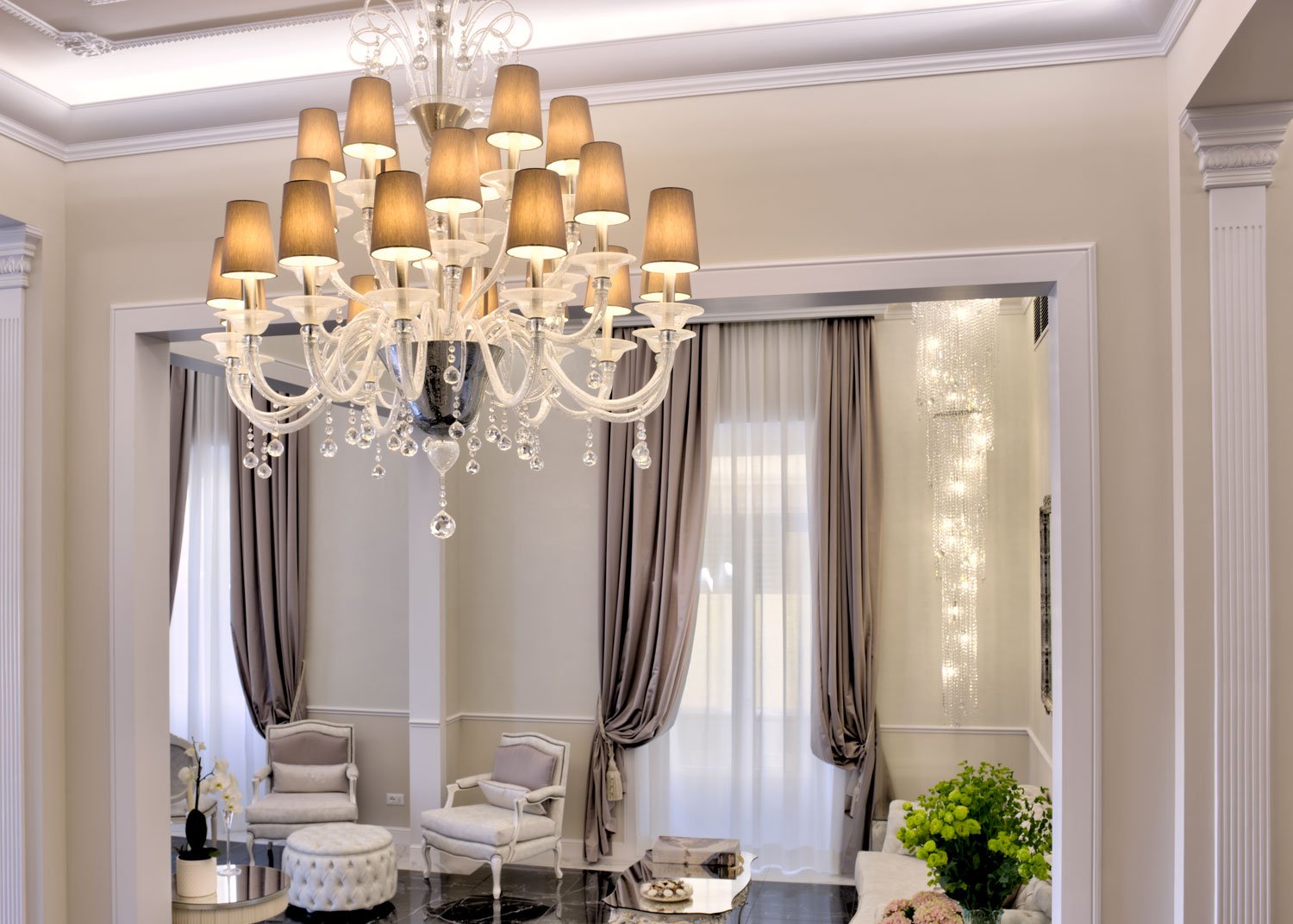